Posted by cathannabel in Personal, Politics on July 6, 2018

October 1990, I’m expecting my first child.  After a straightforward pregnancy, we’re now getting slightly anxious that the baby is overdue and no signs that he/she is going to make an appearance without intervention.  I’ve got a NCT birth plan and everything, but once the process of induction is underway that goes out of the window.  I work my way up through the hierarchy of pain control, barely bothering with the gas and air, quite enjoying the pethidine until it ceases to really touch the edges of the pain.  Epidural now, that does the trick. Blissful moments of peace.  But still no baby, so we’re now looking at a Caesarean, and I’m conscious but pain-free as they lift him out of my belly.

Pain and exhaustion and bliss all at once.  A few weeks later, at home with our son, and he’s crying all the time.  Really, all the time.  Nothing seems to make it better.  I don’t know whether there’s something wrong, or I’m doing it wrong, but then at the 8 week check-up at the GPs, we find out that he’s lost weight.  The baby books are full of reassurances that you shouldn’t panic if your baby hasn’t gained as much as the charts say, but none of them tell us that we shouldn’t panic if he has lost weight.  Next day I’m at the maternity hospital for a post-C-section checkup and hand the baby to a nurse whilst they examine me.  My consultant sees him and tells us to go to the Children’s Hospital A&E.  Now.  Don’t go home first.  We head straight there and the baby and I don’t leave for a fortnight.

The consultant is baffled, but we’re taken care of and I’m looked after when I go down with a tummy bug a few hours after we’re admitted.  And soon they’ve got the baby on medication and he’s starting to recover – turns out his adrenal gland either never kicked in when he was born, or stopped working, and so those hormones need to be replaced artificially.  He also has to have a minor op to correct vesicoureteric reflux which is causing recurrent UTIs (one of which may have triggered the adrenal shutdown).

Once he’s settled on the meds he’s a different baby.  We have a regime of medication, and an emergency kit to inject him if he has an accident or something that might provoke another shutdown, given that his meds are just keeping him at normal hormonal balance, not fight or flight levels (we never used it).  He’s got regular outpatients appointments to check on his progress, and when he’s eighteen months old he goes back into hospital and is taken off the meds to see how he responds.  Amazingly, his adrenal gland kicks straight in, and whilst no one can fully explain what went wrong and then what went right, he’s now a healthy small person, albeit with one kidney that’s just at the lowest level of functionality.  The hospital keeps on monitoring him for several years, and whilst we continue to be anxious for a while, gradually we learn not to be.  We are, as he is, incredibly and for ever grateful for the NHS staff who spotted that there was a problem and then put in place all the resources to solve it.

That is the most dramatic #NHS70 story we’ve got.  But our reliance on the system has continued. It saw us through the birth of our daughter, a problematic delivery after which I needed a blood transfusion (which, ironically, is the reason both why I so much wanted to donate blood myself, and why I can’t). Between the four of us we’ve sampled pretty much all of the various outpatient clinics at the Children’s/Royal Hallamshire/Northern General.  Appendicitis, type 2 diabetes, asthma, hypertrophic cardiac myopathy, hypersomnia, depression, and all the usual ear/chest infections, minor injuries, plus breast screening, smear tests, bowel cancer screening, blood tests, diabetic check-ups, retinal neuropathy screening…  We’ve had help from a panoply of GPs, practice nurses, consultants, registrars, hospital nurses, physiotherapists, healthcare assistants, surgeons and counsellors.

We’ve got so many reasons to be grateful – we know that the system is over-stretched, we know that there’s a problem where medical treatment and social care intersect (or should), and of course not all consultants, nurses, GPs, healthcare assistants or therapists are as helpful, as good at listening, as each other.

But whilst it’s under-resourced, and whilst the quality of treatment will vary from area to area, from person to person, and from medical condition to medical condition, some things are constant.

We’ve had our share of worry – from the paralysing terror of losing a baby to the niggling anxiety that this lump or that twinge might presage something serious.  But we’ve never had to worry about whether or not we could afford to get that niggle checked out.  We’ve never had the fear that the cost of treatment would drive us into debt.  We’ve always known that it’s there for us. 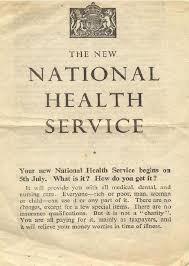 Those principles have been expanded upon over the last seventy years, as society has changed, and as our understanding of what ‘the needs of everyone’  might entail has deepened.  But fundamentally, what we as a family have called upon when we needed it is the NHS as Nye Bevan envisaged it.  It’s met our needs.  It’s been free at the point of delivery.  And it has never, ever, given a damn about our ability to pay.

To those across the pond who talk of NHS death panels whilst so many of their citizens avoid seeking medical help for fear of the medical bills – check your facts, and check your privilege.  If your citizens really understood what we have here, they would want it for themselves, and they would be willing to pay for it through taxation, if they knew that they would never again have to fear the cost of treatment.

To those closer to home who want the service to die the death of a thousand cuts, to point to its deficiencies as evidence that it doesn’t work, to privatise it bit by bit until those core principles no longer mean a damn thing – know this, we will fight you every step of the way.  We have something precious and we won’t let you take it away.

To the NHS, and all who work within it, thank you, we love you. And Happy Birthday.