Posted by cathannabel in Football on March 20, 2015

On 14 April 2012, marking the anniversary of the Hillsborough disaster, I wrote this:

Earlier this week, at the inquests in Warrington, David Duckenfield who was the police commander in charge on the day of the match, acknowledged, at last, at long last, that ‘his failure to close a tunnel that led to the overcrowded Leppings Lane terrace pens directly caused the deaths of 96 people.’

The truth about the tragedy was always known.  It was always that simple.  But the lies that were spun and spread were so effective that it’s taken us 26 years to have that truth stated so starkly, in public.  So to the tragedy of 96 lives lost, and so many more injured and traumatised, so many families devastated by grief, was added the bitterness of the contempt that the dead and their families received, the scandalous lies, the fabrication of blame.

And yet I find myself pitying Duckenfield. Forgiveness isn’t for me to offer, and whether, if I were a family member I could ever have the courage and the grace to forgive I don’t know.   I do not, cannot, sympathise, let alone empathise with him.  I can imagine myself, briefly and inadequately, on those terraces, or in the homes where people waited and hoped and then despaired.   I cannot, however, imagine covering up catastrophic failure and living, for 26 years, with the knowledge of what my failure had done not just to 96 people but to all the others who loved them.  That is beyond my comprehension.

It’s not that I find it so impossible to imagine finding myself out of my depth, being expected to make huge decisions and realising that I haven’t got the knowledge to do so, freezing like a rabbit caught in the headlights of a car, lying on the spur of the moment to try and cover up a catastrophically wrong decision.  There but for the grace of God, as they say.

But faced with that aftermath, not just the bodies, the grieving families but the tabloids full of lies, to remain silent? As Taylor and Stuart Smith inquired and scrutinised, through the private prosecutions and the Independent Panel, he remained silent, acknowledging only what he had no choice but to acknowledge, that he had lied about the opening of the gate.  I can’t understand, I can’t sympathise let alone empathise, and it is not for me to forgive.

But I felt pity for him this week, for the first time in 26 years.  That he suffered from depression and PTSD in the aftermath of the disaster is hardly surprising.  That he, as a middle-aged Yorkshire bloke, was ashamed of that diagnosis, saw it as weakness, and attempted to hide it, is not unexpected.  Locked in his own shame and misery, he could not see, he says he did not see until so recently, what his failure to acknowledge what he did to the 96 was doing to the survivors and the families of the 96.

I’m not letting him off the hook – not at all.  From his blunder and the knee-jerk attempt to blame someone, anyone, for the unfolding disaster rather than to take responsibility for it, flowed everything else that happened that day.  And from his failure to speak out in the days, weeks, years that followed, flowed the persistent stream of misinformation, the inevitable rejoinders to every article or statement supporting the families.  The S*n would not (or so they say) have published that most scurrilous and vicious of reports had they not heard the allegations from the apparently impeccable source of a Tory MP and a police commander.  And inevitably what he says now causes yet more pain.  For the families to hear of his PTSD after their years of agony, to hear him say that failing to foresee the consequences of opening exit gates at the ground was “arguably one of the biggest regrets” of his life – arguably?  ‘one of’?? – must have been extraordinarily difficult, and little wonder that some had to leave the courtroom.

But he’s said it now, and it stands there, that crucial admission, after all these years of denials and lies.  Too late, of course, but it cannot be unsaid.  And I cannot help but pity a man who has carried so much guilt, the responsibility for 96 deaths and for prolonging and intensifying the misery of the families, who has had that weight to carry all these years.  I cannot help but pity a man who has known all along what was right, and been unable to do it.  I do not say that I hope he finds peace now.  Peace is what is owed to the families and the survivors – it’s not for him.  I do, however, hope that he finds some way to channel the guilt and shame that has festered in him for 26 years into doing something good now, something right. 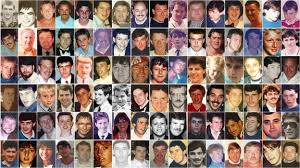