Posted by cathannabel in Events, Michel Butor on March 8, 2014

The long history of Belle Vue Gardens in Manchester is being celebrated this month, and it seems timely to note its appearance, under the name of Pleasance Gardens,  in Michel Butor’s Manchester-inspired 1956 novel L’Emploi du temps (Passing Time).

Butor’s view of Manchester (Bleston in the novel) was, it must be admitted, largely negative.  He loathed the climate, and the food, and seems to have been deeply unhappy in the city, where he arrived to take up the post of lecteur in the French department at the University in 1952.

He seems to have taken to Belle Vue, however.   Pleasance Gardens, along with the various peripatetic fairs which rotated around the periphery of the city, on the areas of waste land, represent a mobile and open element in a closed, even carceral city, and a window on different kinds of community than those indigenous to Bleston.  The narrator sees the friends he knows in a different light in these places, which may be in Bleston but are not fully part of it and don’t share its malaise. 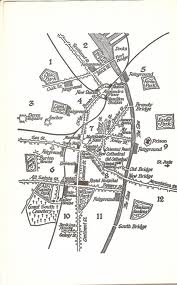 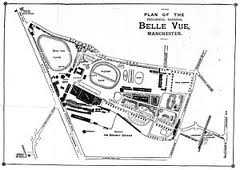 Pleasance Gardens appears on the frontispiece map, in the bottom left-hand corner, its shape not dissimilar to that of the real Belle Vue.   Butor took from the real city of Manchester the geography and architecture that interested him and that fitted with his narrative preoccupations, and ignored or altered the rest.  The descriptions include a great deal of precision and detail – however, the historians of Belle Vue will have to judge where the fictional version departs from its model.

He describes the entrance to the Gardens:

The big folding door which is armoured as if to protect a safe, and only opens on great occasions and for important processions, whereas we, the daily crowd, have to make our way in by one of the six wicket-gates on the right (those on the left are for the way out) with their turnstiles and ticket collectors’

The earthenware topped table which displayed, on a larger scale and in greater detail, with fresh colours and crude lettering, that green quarter circle with its apex pointing towards the town centre…

The tickets themselves are described in detail:

the slip of grey cardboard covered with printed lettering: On one side in tall capitals PLEASANCE GARDENS, and then in smaller letters: Valid for one visitor, Sunday, December 2nd.  And on the other side: REMEMBER that this garden is intended for recreation, not for disorderly behaviour; please keep your dignity in all circumstances’

On this winter visit:

There was scarcely anybody in the big, cheap restaurants or in the billiard-rooms; avenues, all round, bore black and white arrows directing one to the bear-pit, the stadium, the switch-back, the aviaries, the exit and the monkey-house.

We walked in silence past roundabouts with metal aeroplanes and wooden horses, … and past the station for the miniature railway where three children sat shivering in an open truck waiting to start; and past the lake, which was empty because its concrete bottom was being cleaned’.

Posters everywhere echoed: ‘Come back for the New Year, come and see the fireworks’.

A later visit, in summer, followed one of the fires that feature so frequently in the novel.  Belle Vue was devastated by fire in 1958, and whether this account was inspired by a real event I do not know – it may well be that whilst Manchester was plagued by an unusually large number of arson attacks over the period that Butor was there, he extrapolated from that to a fire at Pleasance Gardens, purely for narrative purposes.

In the open air cafe that is set up there in summer in the middle of the zoological section, among the wolves’ and foxes’ cages and the ragged-winged cranes’ enclosure, the duck-ponds and the seals’ basins with their white-painted concrete islands.  I could see, above the stationary booths of this mammoth fairground, eerily outlined in the faint luminous haze, the tops of the calcined posts of the Scenic Railway, with a few beams still fixed to them like gibbets or like the branch-stumps that project from the peeled trunks of trees struck by lightning; and I listened to the noise of the demolition-workers’ axes’

If Butor generally warmed to the Gardens, his portrayal of the animals in the Zoo is less enthusiastic – he speaks of the cries of the animals and birds mingling with the noise of demolition, of melancholy zebras and wretched wild beasts, and of their howls during the firework display.  Perhaps their imprisonment chimed uncomfortably with his own sense of being trapped in the city.