Posted by cathannabel in Africa, Music on October 31, 2015

We should probably have been in a courtyard in Bamako, or Segou. Whole families there, kids and the occasional chicken wandering in and out, meals being prepared and eaten, and the music going on into the night, interspersed with talk, and laughter. We were instead in the august surroundings of Firth Hall at the University of Sheffield, sitting in rows listening to Bassekou Kouyate, legendary Malian ngoni player and griot, with his wife Amy Sacko on vocals, in conversation with Andy Morgan.

As the time went on, you could almost hear the thought processes of the audience – ‘what time was that last bus again?’, ‘I’m going to struggle with my 7.00 alarm tomorrow morning’, ‘Can I discreetly text the babysitter to see if she can hold on for another hour?’. So when people started to slip away, they’d already stayed longer than they’d expected to, and they left wishing they could have stayed longer. We managed quite a nifty slip out of the door whilst clapping manoeuvre. A standing and moving sideways ovation perhaps.

Part of the reason we overran was that Bassekou speaks French and Bambara, so Andy had to tell us what he was going to ask him, then ask him in French, then translate Bassekou’s response. And – a tip for the future – don’t ask a Malian griot to ‘just tell us briefly what that song was about’. Whereas a western musician might be able to say, ‘cars and girls’, or ‘the man who done me wrong’, Bassekou’s answers tended to start with, ‘Well, back in the 13th century there was a king called x, in the town of y…’.

But the music – the music was sublime. The ngoni is a stringed instrument, believed to be the origin of the banjo, and possibly the guitar (though of course there are other stringed, plucked instruments that could claim that). In Kouyate’s hands it’s capable of virtuosic cascades of notes, and combined with the compelling rhythm that kicks in after the first few bars, and the warmth (and impressive range) of Amy Sacko’s voice, it’s music that moves the feet and the hips, as well as the heart.

Malian music makes me happier than almost any other music from any time or place. It’s the source of the blues, carried over the oceans by the human cargo of the slave ships, and mutating as it mixed with the other folk musics (and the hymns and psalms) of the various peoples of the Americas, until this black American music out of Africa became the music of a whole generation. And as it did so, of course, it travelled back home again. In Ghana the merging and melding of these musical traditions created the highlife music that I used to hear wafting over from the student residences in the evenings in Kumasi. In Nigeria, juju music and Afrobeat. In Mali, a rich diversity of music, from such fine artists as Salif Keita, Toumani Diabate, Tinariwen, Ali Farka Toure, and the young musicians who form Songhoy Blues.

At the end of the  concert, Bassekou Kouyate was asked by a fellow West African about the ‘problem’ of western sounds and musical styles taking over indigenous African music. Kouyate was having none of that. The music is theirs anyway – it’s simply coming home again, having changed a bit over the years, and blended with other sounds. There is a vast repertoire of songs there to be rediscovered, interpreted, shared with the world, and as long as this music is being sung and played, and the traditional instruments are being used alongside the western imports, the music will survive, because it’s strong and beautiful. The threat to this music is not of being ‘polluted’ or drowned out by western sounds. It’s from another source altogether, the fundamentalist Islamist groups that have taken over parts of Mali in recent years and where they have done so they have violently suppressed music – not western music, or secular music, but music.

“The world without music? It would be like a prison, right?” (Garba Touré, Songhoy Blues) 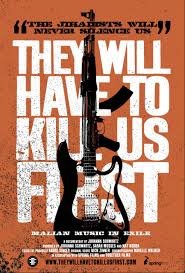