The journey that we most associate with the Holocaust is the one that ends at those gates. 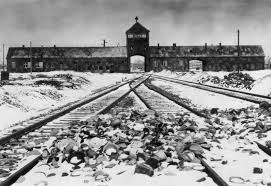 Our imagination cannot go beyond that point, no  matter how many accounts we read from those who survived.  Our imagination baulks at the journey to the gates, not just at its ending – the cattle trucks from all corners of occupied Europe filled with people who not so long before had lives, loves, professions and occupations, and had all of those things gradually stripped from them till all that was left was a name on a list.

But for many of those individuals, the Holocaust journey began long before the cattle truck to Auschwitz.  The Plus qu’un nom dans une liste project has put together  many stories of individuals and families deported from France, and I’ve selected just a couple, to show what happened to them once their homes were no longer safe for them.

The Taussig family left Vienna in June 1939, having obtained a ‘Reisepass’, and left Reich territory the same month via the frontier post of Arnoldstein in Carinthia, where nowadays the three borders of Austria, Italy and Slovenia meet.  Rudolf and his wife Leonie, both 56, and their son Hans, 29, crossed into Italy through the Friuli province.

Italy had stopped allowing foreign Jews into its territory by this time, and  the authorities probably escorted the family to the Italian Riviera.   On 9 July the Taussigs arrived at Roquebrune-Cap-Martin on the Cote d’Azur.  The gendarmes had been alerted by phone that a group of refugees were waiting on the beach for the people to whom they’d paid money for safe passage, and arrested them and took them to Menton.

Those arrested that night were:

On 11 July Rudolf and family were transferred to Lyon, where he and Hans were interned.  Rudolf was freed in January 1940, and Hans on 21 February. On 23 April 1940 Rudolf obtained a refugee worker permit for work as a metallurgist which was extended till 15 July 1941. However, the tribunal in Nice judged them in their absence for having entered France illegally, and condemned them to a month in prison and a fine of 100 francs.  Rudolf and Hans served their sentence at the prison St Paul de Lyon and were freed in September 1941.  They requested emigration to the USA, where their daughter Alice had already settled – she and her husband had managed to leave France for Portugal, where they got a visa in Lisbon in March 1940.

The Taussig family were arrested during the round-ups in the southern zone in the summer of 1942, interned at Drancy and all three deported to Auschwitz in September 1942 on convoy 27.

Gisela Spira fled Berlin early in 1939 with her mother and elder sister Toni.  The three women arrived in Brussels on 31 January, where father Herzel and brother Siegmund were already waiting for them.  The youngest brother, Felix, had already been placed by the Comité d’Assistance at the house of the curate of Wezembeek, east of Brussels.

After May 1940, round-ups of German and Austrians in Belgium as enemy aliens prompted the Spira family to go into exile again, and they crossed clandestinely into France.   They were interned there almost immediately, at Bram, in the Aude.  They were freed on 30 June, and found somewhere to live in Salleles d’Aude, where Gisela met Bertold Linder, ten years older than her, who she married in January 1942.

On 26 August 1942, the Spira family was arrested, apart from Siegmund and Gisela who had moved to Lamalou les Bains, and then to St Martin Vésubie, near the Italian border.  Herzel, Rosa, Toni and Felix were deported on Convoy 31 to Auschwitz where they were murdered.

Hundreds of Jewish refugees had been forced to settle in St Martin by the Italian administration. Many tried to cross the mountains, hoping to meet up with the Allied army.  In August/September 1943, a new danger appeared, as the Wehrmacht occupied the old Italian zone, and on the 10th, the Gestapo arrived in Nice.

At St Martin, the local refugee organisations told families to pack their suitcases as quickly as possible, and to follow the retreating Italian army. Siegmund, Frieda and Roland, and around 1,200 men, women and children then tried to escape across the Alps, a biblical exodus which took place between 9 and 13 September.  328 people were intercepted and escorted to the Borgo San Dalmazzo camp in Italy, under the guard of Italian soldiers until the SS arrived. Two months later, on 21 November, the camp was evacuated, and its inhabitants transported to Nice, where they were interrogated by the Gestapo.

Gisela, her son, brother and husband were deported from Nice to Drancy.  On 7 December 1943, they left Drancy on Convoy 64.  On 12 December, 13 days after Roland’s first birthday, on disembarking from the cattle trucks, Gisela and her son were gassed at Auschwitz.

Siegmund alone survived.  His journey continued from Auschwitz to Bergen-Belsen, where he was liberated.   He settled in the USA.

What’s striking is not just how those journeys ended – it’s that process of seeking safety, finding it illusory, moving on in the hopes that the next place will be different.  Taking their old lives with them as they went from one apparent haven to the next.   In any of the convoys from Drancy there would be those who had sought refuge in France from persecution over the previous half-century from all over Europe, and those whose families had lived in France for generations.  There would be workers and bosses, Communists and conservatives, believers and non-believers.  Some of their journeys were long and convoluted, like those outlined above, with many apparent reprieves along the way until that final denial of their right to live.  Others had been rounded up on French streets where they had spent all their lives, and like Helene Berr, made only a short journey from Paris to Drancy before the terrible journey from Drancy to annihilation.

Those who destroyed them saw them as one thing only.  That’s the nature of genocide, nothing matters except that one defining characteristic – you are a Jew, a Tutsi, and therefore you have to die.   That’s why we have to make them, wherever we can, more than a name on a list.  Gisela Spira, Rudolf Taussig, Helene Berr, deserve their own stories, so that we glimpse the people they were, the people they might have been.

And if we can enter imaginatively into their journeys, can we not also think of them when we hear of those in our own time who are driven from their homes by war and persecution, seeking safety where they can and often finding further perils instead?

W G Sebald describes, in his extraordinary novel Austerlitz, a recording of a film made at the Terezin concentration camp, as part of the effort to present it as a humane and civilised place to visitors from the Red Cross (overcrowding in the camp was reduced before the visit by wholesale deportations to Auschwitz, and once the visitors had left, remaining inmates were summarily despatched too).

In Austerlitz’s search for a glimpse of his mother, who had been interned there before her death, he slows the film down to give him a greater chance of spotting her fleeting image.   This creates many strange effects, the inmates now move wearily, not quite touching the ground, blurring and dissolving.  But:

‘Strangest of all, however, said Austerlitz, was the transformation of sounds in this slow motion version.  In a brief sequence at the very beginning, … the merry polka by some Austrian operetta composer on the soundtrack … had become a funeral march dragging along at a grotesquely sluggish pace, and the rest of the musical pieces accompanying the film, among which I could identify only the can-can from La Vie Parisienne and the scherzo from Mendelssohn’s Midsummer Night’s Dream, also moved in a kind of subterranean world, through the most nightmarish depths, said Austerlitz, to which no human voice has ever descended’. (Austerlitz, pp. 348-9)

The deception that the film sought to achieve is exposed.

The association between Terezin and music has another dimension, however.  A remarkable number of inmates were Czech composers, musicians and conductors, and this, combined with the Nazi attempt to make the camp appear to be a model community with a rich cultural life, gave opportunities for music to be created and performed here.   There is no easy comfort in this fact, when one knows that most of those who played, composed and conducted died here, or at Auschwitz, and that the moments of escape into this other world were few, and may in some ways have made the contrast with the brutality and barbarism of the regime even harder to bear.

The music of Terezin, however, now reaches new audiences through performance and recordings.  Each time we hear the voices of those the Nazis sought to silence, that is a small victory.

Czech conductor Rafael Schachter – transported to Terezin in 1941, organised a performance of Smetana’s The Bartered Bride and finally of Verdi’s Requiem, performed for the last time just a few weeks before his transfer to Auschwitz in October 1944

Jazz musician and arranger Fritz Weiss – arrived in Terezin in 1941, set up a dixieland band called the Ghetto Swingers.  Fritz was sent to Auschwitz in 1944, with his father, and was killed there on his 25th birthday.

Viktor Ullmann – Silesian/Austrian composer, pupil of Schoenberg, was transported to Terezin in 1942. He composed many works there, all but thirteen of which have been lost, before being transported to Auschwitz in 1944, where he was killed.

Gideon Klein – Czech pianist and composer, who like Ullmann composed many works in the camp as well as performing regularly in recitals.  Just after completing his final string trio, he was sent to Auschwitz and from there to Furstengrube, where he died during the liquidation of the camp.

Pavel Haas – Czech composer, exponent of Janacek’s school of composition, who used elements of folk and jazz in his work.  He was transferred to Auschwitz after the propaganda film was completed, and was murdered there.

Hans Krasa wrote the children’s opera Brundibar in 1938, and it was first performed in the Jewish orphanage in Prague.  After Krasa and many of  his cast were sent to Terezin, he reconstructed the score from memory, and the opera was performed there regularly, culminating in a performance for the propaganda film.  Krasa and his performers were sent to Auschwitz as soon as the filming was finished, and were gassed there.

Not all of the musicians of Terezin were killed.  Alice Herz-Sommer survived, along with her son.  Now 110, Alice sees life as miraculous and beautiful, she has chosen hope over hate.

“The world is wonderful, it’s full of beauty and full of miracles. Our brain, the memory, how does it work? Not to speak of art and music … It is a miracle.”