W G Sebald describes, in his extraordinary novel Austerlitz, a recording of a film made at the Terezin concentration camp, as part of the effort to present it as a humane and civilised place to visitors from the Red Cross (overcrowding in the camp was reduced before the visit by wholesale deportations to Auschwitz, and once the visitors had left, remaining inmates were summarily despatched too).

In Austerlitz’s search for a glimpse of his mother, who had been interned there before her death, he slows the film down to give him a greater chance of spotting her fleeting image.   This creates many strange effects, the inmates now move wearily, not quite touching the ground, blurring and dissolving.  But:

‘Strangest of all, however, said Austerlitz, was the transformation of sounds in this slow motion version.  In a brief sequence at the very beginning, … the merry polka by some Austrian operetta composer on the soundtrack … had become a funeral march dragging along at a grotesquely sluggish pace, and the rest of the musical pieces accompanying the film, among which I could identify only the can-can from La Vie Parisienne and the scherzo from Mendelssohn’s Midsummer Night’s Dream, also moved in a kind of subterranean world, through the most nightmarish depths, said Austerlitz, to which no human voice has ever descended’. (Austerlitz, pp. 348-9)

The deception that the film sought to achieve is exposed.

The association between Terezin and music has another dimension, however.  A remarkable number of inmates were Czech composers, musicians and conductors, and this, combined with the Nazi attempt to make the camp appear to be a model community with a rich cultural life, gave opportunities for music to be created and performed here.   There is no easy comfort in this fact, when one knows that most of those who played, composed and conducted died here, or at Auschwitz, and that the moments of escape into this other world were few, and may in some ways have made the contrast with the brutality and barbarism of the regime even harder to bear.

The music of Terezin, however, now reaches new audiences through performance and recordings.  Each time we hear the voices of those the Nazis sought to silence, that is a small victory. 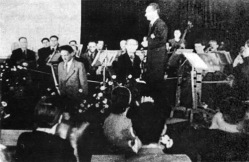 Czech conductor Rafael Schachter – transported to Terezin in 1941, organised a performance of Smetana’s The Bartered Bride and finally of Verdi’s Requiem, performed for the last time just a few weeks before his transfer to Auschwitz in October 1944

Jazz musician and arranger Fritz Weiss – arrived in Terezin in 1941, set up a dixieland band called the Ghetto Swingers.  Fritz was sent to Auschwitz in 1944, with his father, and was killed there on his 25th birthday.

Viktor Ullmann – Silesian/Austrian composer, pupil of Schoenberg, was transported to Terezin in 1942. He composed many works there, all but thirteen of which have been lost, before being transported to Auschwitz in 1944, where he was killed.

Gideon Klein – Czech pianist and composer, who like Ullmann composed many works in the camp as well as performing regularly in recitals.  Just after completing his final string trio, he was sent to Auschwitz and from there to Furstengrube, where he died during the liquidation of the camp.

Pavel Haas – Czech composer, exponent of Janacek’s school of composition, who used elements of folk and jazz in his work.  He was transferred to Auschwitz after the propaganda film was completed, and was murdered there.

Hans Krasa wrote the children’s opera Brundibar in 1938, and it was first performed in the Jewish orphanage in Prague.  After Krasa and many of  his cast were sent to Terezin, he reconstructed the score from memory, and the opera was performed there regularly, culminating in a performance for the propaganda film.  Krasa and his performers were sent to Auschwitz as soon as the filming was finished, and were gassed there.

Not all of the musicians of Terezin were killed.  Alice Herz-Sommer survived, along with her son.  Now 110, Alice sees life as miraculous and beautiful, she has chosen hope over hate.

“The world is wonderful, it’s full of beauty and full of miracles. Our brain, the memory, how does it work? Not to speak of art and music … It is a miracle.”

This entry was posted on January 25, 2014, 7:36 pm and is filed under Genocide, Music, Second World War, W G Sebald. You can follow any responses to this entry through RSS 2.0. You can leave a response, or trackback from your own site.