“Change, my dear… and it seems not a moment too soon.” 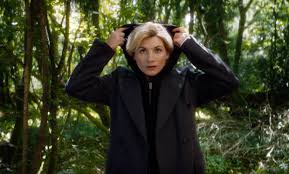 Master: Is the future going to be all girl?

Doctor: We can only hope.

With hindsight it was obvious this regeneration was going to be the one.  The one that brought us a woman Doctor.

We’d seen it established that Time Lord regenerations can involve a change of gender as well as of height, hair colour, apparent age and so on. We’d engaged with the Master/Missy conundrum.

DOCTOR: She was my first friend, always so brilliant, from the first day at the Academy. So fast, so funny. She was my man crush.
BILL: I’m sorry?
DOCTOR: Yeah, I think she was a man back then. I’m fairly sure that I was, too. It was a long time ago, though.
BILL: So, the Time Lords, bit flexible on the whole man-woman thing, then, yeah?
DOCTOR: We’re the most civilised civilisation in the universe. We’re billions of years beyond your petty human obsession with gender and its associated stereotypes.
BILL: But you still call yourselves Time Lords?
DOCTOR: Yeah. Shut up.
BILL: Okay.

With lines like the above, we were being set up to welcome (or not) a woman to the role.  Still, at some level, at least until a couple of days before the announcement, I really thought they might row back from that and say no, not yet, not this time.  I really wasn’t sure they had the bottle to do this.

There’s been a lot of rather predictable frothing at the mouth, harrumphing and incipient apoplexy, with claims that this is the BBC surrendering to some mysterious all-powerful Political Correctness lobby (‘Murdered a part of our culture for feminazi political correctness ideology!’  ‘Doctor Who … didn’t die nobly as you might expect.  He was murdered by Political Correctness’).  That’s best ignored, by and large.  I fear that Jodie Whitaker will have to contend with worse than that, and with personalised unpleasantness, but I’m sure she’s well aware and will be ready for the haters.

Not everyone who dislikes the change is of this breed, of course.  There has to be a core of Doctorness with each regeneration, and some feel that maleness is a part of that.  I disagree, but I suspect that many of those people, if they genuinely love the programme, will continue to watch and will be won over.  Another response was that whilst of course boys have far more heroic role models in popular culture to emulate and be inspired by than girls do, the Doctor is different, and valuable because of the ways in which he is different.  I do see the need for boys to have role models who aren’t all about action and fighting (even fighting for Good against Evil), but part of what makes the Doctor different, for me, is that gender roles and stereotypes simply aren’t (or shouldn’t be) relevant.

A plethora of girls and women have regarded the Doctor as a role model, and identified with him, over Doctor Who’s 50 year span, whilst he’s regenerated, repeatedly, as a man. The Doctor is still, no doubt, going to be the Doctor as portrayed by Jodie Whittaker – alien, two hearts, both of gold, funny, witty, snarky, capricious, kind, adventurous. (Juniper Fish, Doctor Who Forum)

The Doctor can and should be a role model for both boys and girls,  in a way that Captain America or Batman can’t quite be – and probably Wonder Woman and Buffy can’t quite be role models for boys either.  So, the Doctor can continue to inspire boys whilst giving girls and women a whole new image of how to be wise, and brave, how to save the world, to do what’s right, to be kind.  Girls need to develop the confidence to take the lead roles,  not to assume that a hero/a protector is by default male.

Who I am is where I stand. Where I stand, is where I fall. Stand with me. These people are terrified. Maybe we can help, a little. Why not, just at the end, just be kind?

Funnily enough, whilst the Outraged/Betrayed/Will Never Watch Again lobby were as loud and silly as one might have expected, overall what I found on Twitter was a mix of sheer delight, excited anticipation – and a different kind of silliness.  See the #TardisFullOfBras hashtag, for example – someone took a hostile Daily Mail comment and turned it around, so that it’s full of fan art and daft jokes (and bras).  That’s the way to go, I think.

There’s little point in trying to engage with someone who throws ‘feminazi’ into the conversation simply because someone gives a job to a woman that has been previously held by a man.  There’s little point in trying to unpack the hotchpotch of false analogies and fake news and mythology that is evoked whenever the term ‘political correctness’ is used.  And if someone believes that ‘social justice warrior’ is an insult, we don’t really have a lot to talk about.

What matters here, to me, is the delight that this news has brought to so many of us.  It’s only a story, but stories are the most powerful things in the world.

Stories can make us fly.

We need stories, and we need heroes.  And if we can’t immediately see around us the heroes we need, we build them.  It seems that we are having a real moment here.

without hope, without reward, without witness

I felt when I was watching Wonder Woman like punching the air and having a bit of a cry at the same time, and when I think about the Doctor’s next regeneration, I feel much the same.  Of course it is vital that the stories are well written, that the wit and humour is there, as well as the thrills and chills.  Of course it is vital that the gender thing is dealt with intelligently, that stereotypes are undermined or dismissed with humour and that the Doctor is and remains Doctorly, demonstrating both difference and continuity as each new incumbent has done over the last 50 years.

It is perhaps even more vital that the stories are strong because there are those who (even though they may have vowed never to watch it again) will be waiting for it to fail, wanting to say that they told us so, that it could never work, that the Doctor can’t be a woman.  If Jodie kicks it out of the park, as we hope and believe she will, then each regen that follows can be whoever seems right at the time and whoever takes it on will be critiqued for their ability and not for their gender.

Meantime, we’re loving this moment.  Loving it for ourselves  and for our daughters, nieces, granddaughters, all the young women who can now enjoy Doctor Who in a different way, who can take on the lead role in playground games.  Not just companions or assistants but The Doctor.

My love for Doctor Who is, I realise, a bit ridiculous but I don’t bloody care because we all need escapism sometimes and, as my often tested loyalty to lost causes show, my love is nothing if not tenacious. At primary school I distinctly remember the humiliation of a school assembly where some of us were asked to share our pictures of what we wanted to be when we grew up. A Timelord was not an appropriate aspiration for a girl apparently and the piss was duly ripped. Not the first, worst or only time youngling (or indeed “grown-up” me) encountered sexism and ridiculous gender stereotypes but, because as a troubled kid my fantasy life was a refuge and a solace, one of the hardest stings. Anyway, fuck that nonsense because anything can happen with a Tardis and hooray for progress and little girls being allowed imaginations. And no, that does not come at the expense of little boys at all, and yes, I am really sorry Capaldi and Bill are gone because when they got the scripts they were brilliant and that, actually, is the heart of what I want. Good writing, please, please, please (and obviously for me to get a ride in there somewhere with them, because what is the Doctor if not an intergalactic anarcho-flaneuse who needs a bit more glitter?)  (Morag Rose)

Doctor Who is a different sort of hero. The Doctor solves problems not by being the strongest, the fastest or the one with the biggest army, but by outthinking everyone else in the room. Far too many female characters are two-dimensional. I’m ready for one that can travel in four. I’m ready to watch a woman save the world again and again by being very, very clever and very, very moral, without having to have a man sort anything out or come and save her. I’m ready for a woman hero who’s older than recorded history and weirder than a three-day bender in the BBC props cupboard. I’m ready for a female super nerd. And so is the rest of the world.  (Laurie Penny, The New Statesman) 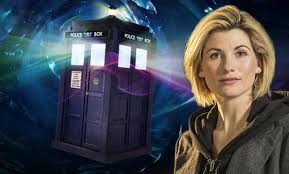 This entry was posted on July 20, 2017, 9:57 am and is filed under Feminism, Television. You can follow any responses to this entry through RSS 2.0. You can leave a response, or trackback from your own site.