Just ahead of Holocaust Memorial Day 2017, I have discovered the work of Felix Nussbaum, a German-Jewish painter who was murdered in Auschwitz  in 1944, aged 40 (all of his family were killed in the Holocaust).

(The two self portraits are from 1940, from his time in an internment camp in Belgium, and from 1943, whilst in hiding in Brussels)

Born in Osnabruck, he moved to Belgium after the Nazis took power, but was arrested there when Belgium was occupied. He was sent to the internment camp at Saint Cyprien (in the Pyrenees) and was imprisoned there. In August/September he succeeded in escaping and returned to Brussels where he went into hiding with his wife Felka Platek.  His work during this period is characterised firstly by the number of domestic scenes and still lifes, reflecting the limited scope he had for direct observation, and secondly more surrealistic and allegorical works reflecting the fear with which he lived.

The subjects of war and exile, of fear and sorrow coloured his pictures. Nussbaum developed an allegorical and metaphorical language so as to create artistic ways of expressing the existential threat to his situation and to his very life that he was experiencing. His last piece of work is dated 18 April 1944. A matter of weeks later on 20 June, Felix Nussbaum and his wife, Felka Platek, were arrested in their attic hide-out and were sent with the last transport from the collection camp at Malines (Mechelen) on 31 July to the concentration camp of Auschwitz. 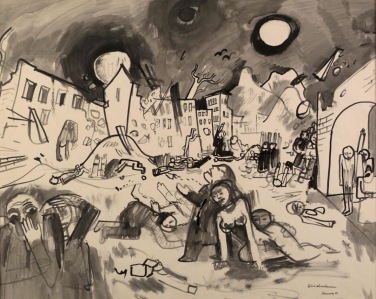 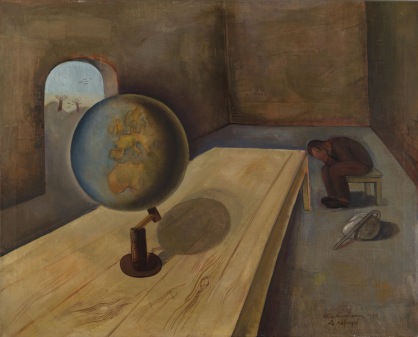 This entry was posted on January 25, 2017, 2:06 pm and is filed under Visual Art. You can follow any responses to this entry through RSS 2.0. You can leave a response, or trackback from your own site.