The first time I was aware of this phrase was in the late 1970s. The boat people then were fleeing from Vietnam, in the bitter aftermath of that long war. Others fled from Cambodia and Laos as repressive governments took over in those countries, and those who couldn’t afford to buy a safer passage by bribing government officials to give them the necessary papers took to the boats, as so many others have done in the decades since.

The mass influx of refugees caused problems then to the countries on whose shores they landed. But there was a concerted, international effort, to spread the load, to share the responsibility. Various memorials in western countries pay tribute not only to the boat people who didn’t survive that perilous voyage, but to the nations who took them in, supported them in making a new life. Some of this was down to guilt – in the US in particular, who had lost a war and left those they had fought for and with to the mercy of the victors. Even so, this benign response didn’t last. Soon enough, the argument was made that many of those seeking refuge were not asylum seekers but people seeking a better life (sound familiar?), and therefore found themselves in detention centres whilst their claims were examined. If they were unsuccessful they faced deportation.

In more recent years, people continue to risk their lives on the sea. Rohingya people fleeing persecution in Myanmar (Burma), refugees from conflict in Eritrea, Syria, Afghanistan and elsewhere.   So many lives have been lost – the vessels barely seaworthy and overloaded with desperate humanity, and apparently all too often a world prepared to look on and judge that these people are not worth the cost of rescue.

Just the other week, David Cameron claimed that the ‘vast majority’ of those who set sail across the Med are not asylum seekers but ‘ people seeking a better life’.  He makes it sound a bit like someone who emigrates to Australia for the climate or a better paid job, or who moves out of the big city for a more peaceful life in the countryside. Actually, the better life they seek is a life free from fear of bombs, guns, starvation. As Somali British poet Warsan Shire says,  “No one puts their children in a boat unless the water is safer than the land.”

Some commentators have shown a quite remarkable ability to scan the faces in the boats and judge where all of these people are from and therefore the validity of their claim. Abdallah’s story suggests why this is nonsensical – he is originally from Darfur, but fled after his village was destroyed, his father killed and his sisters raped, on to South Sudan straight into another civil war, a punishing journey across the Sahara which killed his cousin and brother, and then to Libya. And his third civil war. He saw the risk of the Mediterranean voyage as no greater than the risk of staying – and going home as not even a possibility. 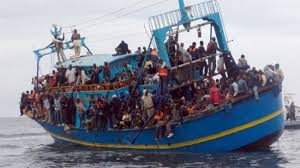 The other thing that is ignored by those who want to categorise these boat people as ‘economic migrants’ is that whilst they may indeed have left their homes to take up jobs elsewhere – and then somewhere along the line their employers take their passports, and essentially treat them as slave labour. If they protest, they risk being reported to the police. And if they leave entirely, they risk being arrested as an illegal migrant. So they can’t go home, even if home is not itself a dangerous and hostile place, because they have no papers. The traffickers will take them.

This entry was posted on June 16, 2015, 5:15 pm and is filed under Refugees. You can follow any responses to this entry through RSS 2.0. You can leave a response, or trackback from your own site.