In the midst of life, we are in death, etc…

…. and nowhere more so than in the haunting (in so many ways) French drama The Returned which recently left viewers on tenterhooks (or alternatively furious and vowing never to darken its doors again) with a final episode that left more questions than answers, and a long wait for series 2. 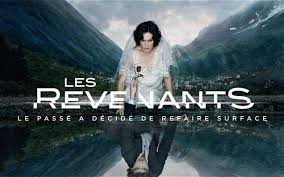 The dead return, apparently unchanged (at least initially), and unaware of their deadness.  Camille walks through her front door as if nothing untoward had happened (she’d died in a coach accident a couple of years previously), demanding food and  complaining bitterly that her room has been rearranged.  There’s no overt horror in her re-appearance, which allows a much more subtle take on its effects upon her family.  The pattern is repeated elsewhere as the newly undead attempt to find their old lives and slip back into them, only to be confronted by the fact that other lives have moved on in the meantime.

Where do these revenants fit in, in the literature and mythology of the undead?   They are not ghosts, which tend to be seen only fitfully and not by all, and to have no physical substance – Camille and her fellow returners are absolutely here, physically, ravenously hungry and startlingly randy too.  Ghosts often have a purpose too – like Banquo they are here to shake their gory locks at those responsible for their untimely demise, or to seek a way of resolving their unfinished business in this world – but if these have a purpose it’s not clear what it might be – at least not yet. They are not zombies, whose physical substance has been reactivated without the personality, the mind, the soul (if you will) that previously accompanied it –  an ex-person, reduced to a body and a hunger – these returners know who they were, who they loved, and have the full range of human thought and emotion.

Dramatically, there is much that recalls those stories of individuals believed to be dead, and reappearing unexpectedly to cause consternation and conflict as they try to reclaim their lives (Balzac’s Colonel Chabert, Martin Guerre, Rebecca West‘s Return of the Soldier).   However, Rebecca West’s returning soldier and Balzac’s Colonel Chabert are not instantly recognisable as the people they once were.  Chabert, who has clawed his way out of a mound of corpses, looks like what his former wife would wish to believe he was, a madman and an imposter.  Those who made their way home across Europe, as he did, over a century later, were often changed beyond recognition too, their health (mental and physical) permanently damaged, skeletal and haunted both by what they had witnessed and by their own survival.  The return of the deportees was a ‘retour a la vie’, and some at least, with care and medical treatment, did begin again to resemble their previous selves.   Like Dickens’ Dr Manette, ‘recalled to life’ after years of incarceration, and gradually establishing a fragile hold on life again.

In The Returned, Camille’s father says to his estranged wife Claire that ‘you prayed for this’ – it’s an accusation rather than a statement, even though in his own way he too had sought a continuing connection with the daughter he’d lost.  That reminded me of the episode of Buffy (‘Forever’, Season 5), where Dawn attempts to use witchcraft to bring back her mother, realising as she hears the footsteps approach the door that what has come back will not be the person she is grieving for.  She breaks the spell, just in time.  This thread is picked up in the following season as Buffy herself crosses back over that threshold between death and life, and feels that she isn’t quite as she was, that she has ‘come back wrong’.

Stephen King explored this too, in Pet Sematary, where the knowledge that one could bring back the deceased is too powerful for the protagonist to resist, even having tested the water, as it were, with a cat (who most decidedly isn’t the creature it was before)

and in the madness of terrible loss and grief does not turn back as Dawn did from bringing back his lost son.   The returned in King’s narrative look and sound almost like themselves.  Almost.  They know stuff though, that they should not know, and they are malign, clearly demonic.  Some of The Returned’s revenants seem to know stuff in the same way and to be able to use their knowledge to challenge or goad the living.  But whether they are on the side of the angels I would not want to say.  Ask me in a year or so, when I’ve seen Season 2.

The Returned‘s revenants were not (despite Claire’s prayers) brought back by the living, they appear to have simply returned.  But throughout literature the appearance of the dead amongst the living has always been associated with a threat – with the terror or destruction of the living, or with the exposure of past crimes and injustices.  Or, at the very least, the confrontation of the living with the trauma of death, in the person of those who have inhabited the liminal space between death and life. Thus neither the unexpectedly alive nor the undead can simply be reintegrated into society, even if the living can accept them.  They haunt us, and are themselves haunted,

What these various narratives address is the sense of unfinished business that is inevitably part of bereavement, and the notion that death is a threshold that might, just, be permeable.  There’s a moment in an otherwise entirely negligible children’s film, Caspar the Friendly Ghost (yes, I know, bear with me) where the dead mother entreats her husband and daughter: ‘I know you have been searching for me, but there’s something you must understand. You and Kat loved me so well when I was alive that I have no unfinished business, please don’t let me be yours.’  That one line justifies the existence of the film, for me.  Because so many of these narratives are really about how impossible it is for the living to deal with death.

Which takes me back to Buffy, and the extraordinary words that Joss Whedon puts into the mouth of Anya (she’s a thousand-year-old vengeance demon, but don’t worry about that, the point is that she says the stuff that we feel, and think, but don’t say):

I don’t understand how this all happens. How we go through this. I mean, I knew her, and then she’s – There’s just a body, and I don’t understand why she just can’t get back in it and not be dead anymore. It’s stupid. It’s mortal and stupid. And – and Xander’s crying and not talking, and – and I was having fruit punch, and I thought, well, Joyce will never have any more fruit punch ever, and she’ll never have eggs, or yawn or brush her hair, not ever, and no one will explain to me why. (‘The Body’, season 5)

So the unfinished business is not theirs, but ours.  And they come back, in dreams, but we know that their presence is not quite right, that time is out of joint if they are here.  I’ve dreamed so often that my mother is alive.  But never without that sense of unease, which could not be further from the feeling that I associate with her, of warmth and comfort and of being loved.  She has gone, and we haven’t got over it, and we won’t, but we know it is real.

Still, that boundary, that threshold, is always disturbingly present, just on the edge of our field of vision, and so we will continue to be fascinated by the notion that sometimes they do come back, and how that might be, even if it is and will always be the stuff of nightmares.

This entry was posted on August 14, 2013, 9:32 pm and is filed under Literature, Television. You can follow any responses to this entry through RSS 2.0. You can leave a response, or trackback from your own site.