You and the Refugee 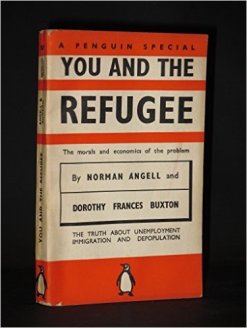 Extracts from You and the Refugee, published 1939:

‘There are some of the saddest scenes in the world from which we British people are forever spared, and of which the keenest imagination among us could hardly form an adequate picture.  …  In the darkness of night, or in the grey of dawn, desperate men and women, sometimes even dragging along a pitiful child, make a dash to get through that double line [of armed police] and risk the rifle shot.  Some of them, like human tennis balls, are driven backwards and forwards, time after time, across the frontier.’ (p 231)

‘Hundreds of Jews are hiding in the German woods near the Dutch frontier.  Whenever they try to cross into Holland they are forced back by the Dutch gendarmes, to be arrested by the German police’ (The Times, 19 November, 1938)

‘In England, when we are aroused in the early hours of the morning by a sharp rap on the door, we think only of the milkman.  But the refugee who is safely in England still finds himself starting up in bed, his heart turning sick at such a sound’  (p. 233)

Norman Angell & Dorothy Frances Buxton, You and the Refugee: the morals and economics of the problem (Harmondsworth: Penguin, 1939)

This entry was posted on June 18, 2012, 8:34 pm and is filed under Refugees, Second World War. You can follow any responses to this entry through RSS 2.0. You can leave a response, or trackback from your own site.