See below for details of a new Butor exhibition/event at MUAC, Mexico City: 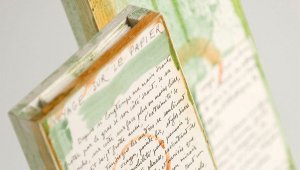 The MUAC, through the Arkheia Documentation Center will present an exhibition on the french writer Michel Butor’s (France, 1926) file, including some of his works and books about artists and contemporary art.

Michel Butor has over 1500 publications covering various fields such as music, science, philosophy, literature and the arts. He is known in the field of French literature, mainly due to his most famous novel The Amendment, considered one of the pillars of what is known as the new novel (Nouveau Roman) written from start to finish in second person singular, the spanish equivalent to “thou”.

This novel was adapted by Michel Worms into a film in 1970 with the same title. After posting grades in 1960, Michel Butor stopped writing novels and by 1991 he abandoned teaching and retired to a village in the Haute Savoie. Since 1986 he has worked with over two hundred painters, sculptors, printmakers and photographers from different nationalities and published with them essays and books.

As part of this exhibition, a group of Mexican intellectuals close to Butor, undertake a series of conversations to be held in the auditorium of the MUAC.

This entry was posted on April 18, 2012, 10:21 pm and is filed under Events, Michel Butor, Visual Art. You can follow any responses to this entry through RSS 2.0. You can leave a response, or trackback from your own site.