The bullet wound in Francis Gusman’s spine makes it hard for her to travel. When gangs shot at each other in her hometown of Yoro in Honduras in 2016, she was hit by a stray round and has been unable to walk since. But when gang members then murdered her sister this February, she decided she had to leave, however hard the journey.

She set off on the dangerous migrant trail north, along with her husband, 12-year-old son, and her sister’s orphaned 13-year-old daughter. After crossing the Mexican border, her husband and a friend had to carry her 36 miles along the road to this town of Tenosique in southeast Mexico. Here they have applied to Mexico for refugee status, arguing the gangsters who killed her sister could target her niece for being a potential witnesses or go after other family members….

Gusman’s story illustrates the brutality that is pushing many to leave the Northern Triangle of Central America, which includes Honduras, Guatemala and El Salvador, and seek refuge in nearby countries, including Mexico and the United States. The number of asylum applications in Mexico has rocketed, from 2,000 in 2014 to more than 14,000 last year, with Honduras as the leading source of applicants, according to the United Nations Refugee Agency (UNHCR).

However, this surge comes as more Mexicans are themselves fleeing violence to seek refuge in the United States. In the first three months of 2018, the Northern Triangle nations and Mexico made up four of the six top source countries of applicants for U.S. asylum, government data shows.

“People are leaving because they are suffering from high levels of violence from gangs and other organized criminal groups. These gangs want to recruit minors, they carry out extortion, kidnapping, sexually abusing girls,” says Francesca Fontanini, spokesperson for the UNHCR in the Americas. “This flow of families from Central America will not stop because if the root causes are still there these people will keep coming to the U.S. or to other countries.” 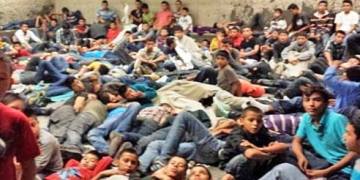 The violence in Honduras, Guatemala and El Salvador continues to force thousands of people to head north in search of refuge, even as the Trump administration imposes cruel practices intended to deter them from seeking asylum. Last week, US Attorney General Jeff Sessions ruled that people submitting claims related to domestic or gang violence will not qualify for asylum—a decision that effectively closes the door to many Central Americans fleeing for their lives. In recent weeks, authorities have stepped up criminal prosecutions of people attempting to cross the border, going so far as to forcibly separate children from their families. …

Initial talks between the US and Mexican governments in May considered the possibility of converting Mexico into a “safe third country”. This would force asylum seekers to apply in Mexico, preventing them from reaching the US to demand refuge.

More than 20,000 migrants or refugees are kidnapped in NTCA countries – Guatemala, Honduras and El Salvador – every year, according official sources (CNDH). Sixty-eight per cent of the migrants and refugees interviewed by MSF in places along the transit route in Mexico had been exposed to violence. Nearly one-third of the women surveyed were sexually abused. Central American gangs are operating in the south of Mexico and are responsible of some of the attacks against migrants.

MSF medical data shows that a quarter of our medical consultations for migrants and refugees in Mexico are related to injuries from intentional violence. Ninety per cent of our mental health consultations are related to violence. Our patients are suffering from anxiety, depression, and post-traumatic stress disorder, among other conditions, which have severe consequences on their ability to function. Women, children, and members of the Lesbian-Gay-Bisexual-Transgender-Queer (LGBTQ) community are more vulnerable to certain types of violence and require specific protection measures that are not effectively in place in Mexico.

In 2015, when the current refugee crisis was at its most intense, Germany took the lead.

Berlin took the lead in efforts to resolve the European refugee crisis on Monday by declaring all Syrian asylum-seekers welcome to remain in Germany – no matter which EU country they had first entered.

Germany, which expects to take a staggering 800,000 migrants this year, became the first EU country to suspend a 1990 protocol which forces refugees to seek asylum in the first European country in which they set foot.

Germans gathered by the hundred at train stations on Sunday to welcome refugees arriving in their cities as if they were long-lost friends or returning war heroes.

An estimated 10,000 refugees were expected to arrive in Germany by train from Hungary and Austria on Sunday, and they were greeted with spontaneous rounds of applause and songs, as well as sweets, pastries and toys, on station platforms across the country. At Munich station, volunteers amassed a large stockpile of food. Helpers at the main train station in Frankfurt formed human chains to pass bags of food, clothing and toiletries to the exhausted arrivals, whom they welcomed with banners and balloons.

Today, four Syrian families have made their home in Wegscheid – including the Aljumaas. Mahmoud Aljumaa arrived in Germany in 2015; his two daughters and wife, Ghofran, a year later. The girls, 6 and 8, already speak perfect German, tinged with the local Bavarian accent.

The Aljumaas say they have been welcomed with open arms here, but the political debate over immigration and asylum has changed the tone, stoking fear and uncertainty. They have asylum statusfor now, but they fear that could change.

The Aljumaa family has made Wegscheid their new home

“I want to ask German politicians a question: Are we refugees or should we integrate? If we should integrate, that means that we would be like Germans after some time. It would mean we aren’t refugees,” said Mahmoud. “My daughters can’t read or write in Arabic. My older daughter is in the sixth grade and in Arabic she would be sent back to second grade. How could I send them back to Syria, send her back to the second grade? It would destroy her life.”

Their sense of uncertainty has only grown as they have seen fellow refugees from Afghanistan – a country they say cannot be deemed safe – increasingly facing deportation.    …

Most everyone we spoke to in Bavaria seemed to agree on one point: From 2015 to now, this region has handled the refugee crisis and integration efforts well. Now they need a clear signal from German policymakers on whether refugees are really welcome to stay and become a part of German society.

The welcome offered to refugees in 2015 was particularly poignant in light of German history.  During the Nazi era as anti-Jewish legislation and other repressive measures were introduced and tightened, there were many desperate to leave.   People continued to try to find ways out of Germany and the occupied territories throughout the war years, at great risk to themselves and anyone who tried to help them.

One largely overlooked refugee story from that period, however, is the forced migration of ethnic Germans just at the end of the war from Poland, Czechoslovakia and the Soviet Union.

Historian R.M. Douglas has written one of the only English language books on the subject, has described it as “not merely the largest forced migration but probably the largest single movement of population in human history,” with between 12 and 14 million civilians to move in just a few years. Douglas wrote that this mass movement of peoples was accomplished “largely by state-sponsored violence and terror” – including murder, torture and rape. Hundreds of thousands of Germans ended up in internment camps, some of which had just shortly before been Nazi concentration camps.

Accounts from those who made the journeys are horrific. One woman wrote of spending days standing on a freight train traveling from what is now northeastern Poland. “Pregnant women who had given birth had frozen to the floor,” the account, later published in Der Spiegel, read. “The dead were thrown out of the windows.” …

In Germany, the expulsions are still remembered, even while Nazi atrocities are, too. “The Nazis’ crimes had been far worse,” Der Spiegel wrote in a lengthy article in 2011, “but the suffering of ethnic Germans was immense.” Perhaps that’s why the current refugee crisis, of a comparable scale to the German expulsions (almost 12 million people have been displaced in Syria alone), has found a relatively large amount of sympathy in Germany, a country that expects to receive 800,000 refugees this year. Even if many in the country are far too young to remember the German expulsions themselves, they may remember the damage wrought upon older family members. Much like these family members, modern-day refugees are having their fate decided for them by their nationality.

This entry was posted on June 23, 2018, 1:41 pm and is filed under Refugees. You can follow any responses to this entry through RSS 2.0. You can leave a response, or trackback from your own site.