Women become refugees for most of the same reasons that men do. They experience most of the same terrors, dangers and indignities along the way. But there are also particular threats that may drive them to leave everything behind and seek safety somewhere else. The fear or immediate threat of forced marriage or genital mutilation, for them or their daughters. The use of rape as a weapon of war, or as a routine way of punishing women for resistance, or for their sexual orientation. 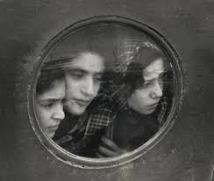 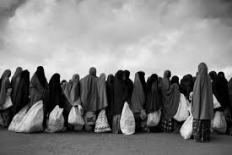 And leaving home, the perils of the journey, the insecurities of their place of arrival expose them even more to the threat of sexual violence, as destitution may lead to their exploitation by traffickers and pimps. In detention, women who have been raped or sexually abused, or whose culture imposes a duty of modesty, may find themselves being searched, or watched whilst dressing or washing, by male guards. Some have been sexually assaulted by their guards.

Lengthy indefinite detention is inherently unjust. It is inherently damaging to refugees who are already traumatised by their experiences. There must be some alternative to treating people who have sought sanctuary here more harshly than those who have been convicted of a crime. There must be some recognition that the women in Yarls Wood, if they must be detained, need to be safe from harm, treated with kindness, their privacy respected. Pregnant women, and anyone who is sick, physically or mentally, should not be there.

Refugee women can and do contribute. A A Gill, who wrote a series of articles on refugees in DRC, Jordan and Lampedusa published in The Sunday Times Magazine, said: ‘In Congo I realised a truth I’ve known all my life. Whilst women are often victims, they are also often the catalyst for making things better.’ The Refugee Council has for the last few years celebrated these contributions, and here are a few of the recipients of their awards. 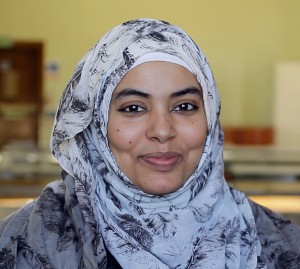 Asma was born on the Brava Coast in Somalia and came to the UK in 1992 having spent much of her childhood in Kenyan refugee camps. Now working in Barnet at the Somali Bravanese Welfare Association, Asma has built a thriving centre and education programme that supports 200 students and their families.

In 2014 Lilian Seenoi, a refugee from Kenya, was recognised as Woman of the Year for her work setting up North-West Migrants Forum – the only migrant forum in Derry/Londonderry, from her kitchen table. Lilian sought asylum in the UK after her work rescuing young girls from early marriage put her life in danger. Her work in Northern Ireland now brings together diverse migrant groups and local communities who have suffered years of tension. Lilian quoted from the Migrant Manifesto: ‘I have witnessed how fear creates boundaries, how boundaries create hate and how hate only serves the oppressors. I do understand that migrants and non-migrants are interconnected. When the rights of migrants are denied, the rights of citizens are at risk. Dignity has no nationality.’

Constance Nzeneu, who received an award in 2014, fled to the UK in 2005 from the threat of a forced marriage in Cameroon where she had trained as a lawyer. After she applied for protection, she was dispersed to Cardiff whilst her asylum claim was being processed. Like thousands of asylum seekers, Constance had no choice over where she would live and had no right to work, but she did not stand still, with the help of a training she became involved in advocacy and community work, This is how she describes those early days:

“I was refused asylum and I realized that there were so many people out there with similar or worse experiences than mine. There was no project led by women seeking sanctuary and I think you can’t really understand this situation – being destitute, being homeless and thinking what am I going to eat tonight, and I don’t want to be a burden to anyone, and how long am I going to be allowed to stay, and I’m about to be deported, what should I do…unless you’ve been through it yourself.”

She now leads Women Seeking Sanctuary Advocacy Group Wales (WSSAG), which she set up to support other women to cope with exile, and to raise awareness within Wales about why women seek sanctuary. The group is now 40 strong. 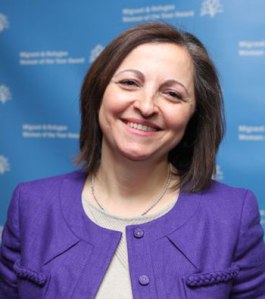 Community work comes naturally to Nazek Ramadan, who received an award in 2012. In the 1980s she opened her home in Beirut to refugees, and when she and her family had to flee Lebanon for the UK in 1986, she began volunteering soon after she arrived in London, initially at an Arabic speaking supplementary school. Her first challenge was to learn English, which she did by watching children’s TV (advice she still gives to others), going to classes and joining in any activity she could. The early years in London were not easy and Nazek experienced racial abuse. She discovered that learning English and getting a job were not enough to be accepted. When a fellow migrant said to her ‘how can they hate us so much, when they don’t even know us’ she replied by saying, ‘you’ve answered your own question, they don’t know us’. She realised that ‘everyone was talking about migrants except migrants’ and so set out to remedy this.  In 2007 she launched the New Londoners newspaper which, modelled on London’s freesheets, succeeded in getting migrant and asylum issues in front of London commuters and won two awards from the Mayor of London. And in 2010 she founded Migrant Voice, an organisation dedicated to addressing the lack of representation of migrants in the mainstream media.

These women left their homes and loved ones, fleeing war and persecution, and managed not only to build a new life for themselves and their families, but also to support and inspire people and communities across the UK.

This entry was posted on June 18, 2015, 8:23 pm and is filed under Refugees. You can follow any responses to this entry through RSS 2.0. You can leave a response, or trackback from your own site.