Once a year, for the last four years, my city has been taken over by music.  In the parks, the pubs, the squares, the cafes, the galleries, even the Cathedral, bands known and unknown have played, and Sheffield people – and visitors from further afield – have listened, cheered, and danced.

I love this city anyway, for its hills, its green places, the way in which it manages to be not just a metropolis but a collection of villages grouped around a vibrant cultural centre.  Fill it with music and I am besotted.

It used to be free, and it couldn’t stay that way, sadly.  But lots of it still is, and I paid £15 for the privilege of seeing 18 bands last weekend, constrained only by my own stamina, the necessity of spending a little time on boring necessities such as shopping and laundry, and the logistics of getting from one venue to another to see everyone I might have wanted to see.

The sunshine helped of course, and the mood, wherever we went, seemed to be as sunny as the weather. The police reported – well, nothing really.  There were grumbles from people who’d bought tickets and didn’t get in to see the big names on Devonshire Green – but if you buy a Glasto ticket (at a somewhat greater cost), does that guarantee you’ll see the headliners?  I don’t think so.  And there were some late timetable changes which inevitably meant disappointments too.  But it was a blast, and a thoroughly joyous weekend.

And the best of it? Unquestionably Malian band Songhoy Blues, playing in the Millennium Gallery on Saturday night.   I’d resisted the calls from most bands I’d seen to tell them if I was having a good time, or if I was ready, or to clap along.  But when Aliou Toure asked us all ‘You like?’, we told him in no uncertain terms that yes, we did, we liked.

West African music moves me so deeply partly because of my childhood in Ghana, and later in Nigeria.  As a small child living near the University campus in Kumasi, we heard the highlife music drifting over from the student residences, a hypnotic blend of Latin sounds and indigenous Ghanaian rhythms.  And in Northern Nigeria at the end of Ramadan I watched Tuareg horsemen in blue robes and headdresses charging down the main drag, magnificent and unforgettable.

Over the years I’ve listened to music from all over that continent – many years back I saw the Bhundhu Boys from Zimbabwe and S E Rogie from Sierra Leone live at the Leadmill, and the CD collection (and my iPod running selection) includes King Sunny Ade, Youssou n’Dour, Baaba Maal, Salif Keita, Habib Koite, Tinariwen, Ali Farka Toure and others.

More than any other African music, I come back to the sounds of Mali.  Partly it’s because I love the blues, and in Malian music you hear that, the source of the blues, its DNA (as Martin Scorsese put it).  There’s immense variety in the music of Mali, the soul of Salif Keita, desert blues from Tinariwen, hints of flamenco in Habib Koite or Toumani Diabete – rich in influences from and on other musical traditions, but always clearly Mali. 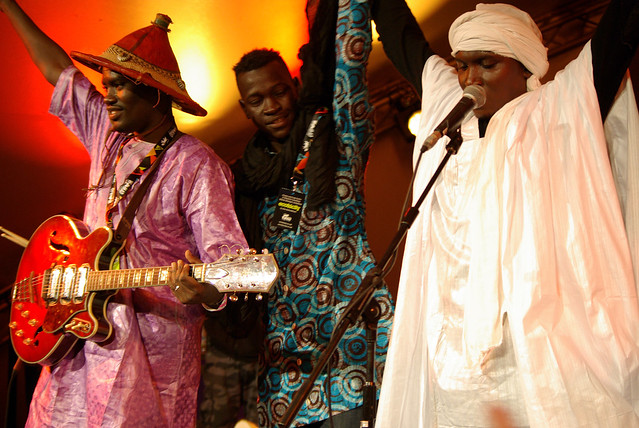 This sublime musical culture has been threatened in recent years but on the evidence of last weekend it is strong, gorgeous, joyous.  Songhoy Blues made me dance, made me smile like an idiot, made me cry a little, when Aliou Toure spoke about his country, his continent, and what the music stood for – peace, love, unity. 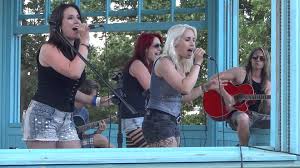 To all of the musicians, and to everyone who made it happen,

This entry was posted on August 1, 2014, 8:57 am and is filed under Events, Music. You can follow any responses to this entry through RSS 2.0. You can leave a response, or trackback from your own site.