Finally, I get to do my Desert Island discs.  Kirsty Young appears to have lost my contact details, but no matter, because this year the 24 Hour Inspire featured a pop-up radio station, and I was asked to choose 6 tracks, a book and a luxury, and to talk about them with interviewer Chella Quint.

But how to pick just 6 tracks?  It would not, realistically, have been easier if it was the BBC 8.  Or even 12, or 20… Not when music has been such a huge part of life, not when it matters so much.

Listening, as I often do, to contributors to Desert Island Discs, I can see a range of different approaches to the task of selection.  Some take the biographical approach – linking the tracks explicitly to key points in the life story they are describing.  This is interesting, and enriching to the biography, but it may mean that the music doesn’t stand up in its own right, and has purely nostalgic value.  Some just pick 8 tracks they kind of like – but you can tell in this case that music is not a passion, not an obsession but a pleasant accompaniment to other things.  They have not agonised about those choices, they haven’t felt as though they have personally betrayed the artists who don’t feature in the final cut.  That’s fine, but I can’t be like that.

When music really, really matters, the problem is not finding 6 or 8 or however many tracks, it’s finding a rationale for selecting for this particular purpose, on this particular date and time.  That’s how I come to terms with it – on another day, in another context, I could and likely would have an entirely different set of tracks.  So, what was my approach this time?

First off, I wanted to be able to say something about each track.  Not just, this is brilliant, I love this, listen to this bit (although in a normal music-listening context there is a lot of that).  But something about why it matters to me, how I encountered it, what it does to me.  Secondly, the context.  It’s the 24 Hour Inspire, so the music I pick has to be something that moves me, challenges me, disrupts me, inspires me.

Even outside this particular context, I can’t be doing with music that is merely pleasant.  It has to move me – that can mean intellectual stimulation (a Bach fugue, for instance, or much of European postwar ‘classical’ music), emotional impact (much sacred music, even though I’m a humanist, and a host of songs that for some reason – lyrics, context, something in the tune, something in the vocals – make me well up or want to punch the air), physical effect (heavy grungy sounds, infectious dancey sounds, music that makes me move my feet, my hips).  These are not mutually exclusive categories, of course, as my choices will demonstrate.

There had to be music from Mali.  Because that’s where so much of the music I love was born – think Muddy Waters, think Hendrix – before it was transported across the oceans on the slave ships, asserted its power as it blended with the folk music and hymn tunes it encountered in the Americas and then made its way back home again. 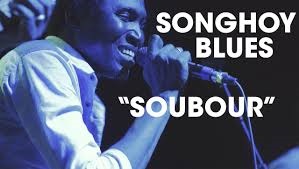 Songhoy Blues grew up listening to the rich Malian tradition, and griots such as Ali Farka Toure – and to Muddy Waters and Hendrix.  You can hear all of this in their music.  I’ve written previously about some of the reasons why I feel such a strong emotional connection with West African music, and about the other powerful dynamic in contemporary Malian music – the resistance to the murderous jihadist bigots who invaded the north of the country, and banned football and music, inflicting brutal punishments on those who failed to comply.  Songhoy Blues’ sound is joyous, a powerful riposte to the bigots, a reminder that the ‘grey zone’ as they call it is full of colour, full of melody, harmony, rhythm, full of beauty and warmth.

And this year of all years, there had to be Bowie. 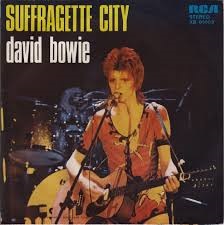 This one goes back to my first encounter with the Star Man, which I wrote about on the day his death was announced.  It’s not necessarily my favourite ever track but it’s deeply significant as the start of a relationship that has continued throughout my teenage and adult life, and will continue, despite his death, because all of that music is still there to enjoy and explore.

Crimson were part of my teenage years too. 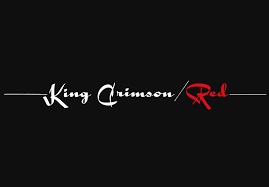 I’ve always said that Red was my favourite album from the 70s manifestation of the band, and often said that ‘Starless’ was my favourite track on that album.  But for desert island purposes, Starless would be so wrong.  It could actually feature in a ‘songs that must never be played during a lonesome, marooned and possibly hopeless sojourn on a desert island’ list.  Instead I picked the title track, a grungy heavy instrumental that I always loved, that I remember listening to, drinking cheap cider, sitting on the floor at my boyfriend’s house, and rocking out.

Kirsty MacColl would have to be with me on the island. 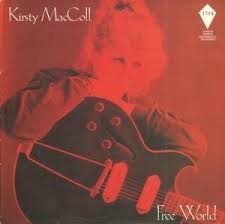 I imagine she’d have been great company in person – certainly the musicians she collaborated with talk about her with enormous affection and warmth, but also respect.  She certainly deferred to no one – Johnny Marr tells a lovely story of her taking Keith Richards to task for getting something wrong on the guitar, and Keith accepting it meekly…  Kirsty’s songs can be funny, poignant, sharp (sometimes all three), her voice is gorgeous, and she’s one of a number of women in rock/pop music who have managed to make their own rules, to do things their way, against the odds.    This song makes me want to punch the air and change the world.

Another voice of rare beauty – actually one of the loveliest voices ever, anywhere:

This song is heavy with the hope and the hopelessness of the early sixties civil rights movement – people holding on to the possibility of change whilst being confronted daily with implacable  hostility to change.  I think of that – but I also think of the fact that an African-American currently sits in the White House, and for all the injustice and inequality that remains, for all the entrenched prejudice, things can and do change.  I would never have believed, twenty years ago, for example, that gay marriage would be legal in so many parts of the world.  And for all that there are still so many places where to be gay is to be outside the law and in danger of violence, it happened without that much fuss here, and in other countries, in the end.  Even outside the social justice activist world, most people seemed to say, tacitly or otherwise, good on them.  I have to remember and have faith that every time things seem hopeless, that a change IS gonna come.

And finally to the least well-known track of my six.

TRACK 6: FLOBOTS – WE ARE WINNING

The Flobots are hard to pin down – the highly political lyrics, spoken and sung, are backed not just with guitars and drums but with viola, cello and trumpet and the effect is intense and powerful.  This track is marvellously idealistic, optimistic, hopeful.  We are Winning.  It doesn’t always (often) feel like it, but it’s something to hold on to, something to keep you keeping on.  It speaks to my belief that what we do matters, precisely because this world is all there is.  As Joss Whedon put it, in Angel:  “If there’s no great glorious end to all this, if nothing we do matters then all that matters is what we do. Cause that’s all there is. What we do. Now. Today.” And there’s a particular pertinence in these lines in the context of an event that celebrates learning, teaching and research:  There is a war going on for your mind.  If you are thinking, you are winning.

We are building up a new world.
Do not sit idly by.
Do not remain neutral.
Do not rely on this broadcast alone.
We are only as strong as our signal.
There is a war going on for your mind.
If you are thinking, you are winning.
Resistance is victory.
Defeat is impossible.
Your weapons are already in hand.
Reach within you and find the means by which to gain your freedom.
Fight with tools.
Your fate, and that of everyone you know
Depends on it.

Selecting my six tracks might have been tricky, painful even.  I feel I owe a personal apology to so many artists I love but have left out, and if I were to do this again (I ‘m more than willing, guys) I could easily come up with another six, and another, and another…

But these felt good.  The 24 Hour Inspire is all about inspiration (obviously), and I feel inspired when I hear these songs.  I feel energised, and optimistic, and I want to dance, and to punch the air and change the world.  I hope at least some of the songs will affect at least some of you in similar ways.  I’ll add the recording of the interview when it’s available. Meantime, enjoy!

This entry was posted on May 19, 2016, 4:32 pm and is filed under Music, Personal. You can follow any responses to this entry through RSS 2.0. You can leave a response, or trackback from your own site.