Variations without a Theme

A child in the dark, gripped with fear, comforts himself by singing under his breath.  He walks and halts to his song.  Lost, he takes shelter, or orients himself with his little song as best he can.  The song is like a rough sketch of a calming and stabilizing, calm and stable, center in the heart of chaos.  Perhaps the child skips as he sings, hastens or slows his pace.  But the song itself is already a skip: it jumps from chaos to the beginnings of order in chaos and is in danger of breaking apart at any moment.  There is always sonority in Ariadne’s thread.  Or the song of Orpheus.  …  One launches forth, hazards an improvisation.  But to improvise is to join with the World, or meld with it. One ventures from home on the thread of a tune.

There’s so much in this short passage that resonates with me.  Often with Deleuze my grasp is fleeting – I understand (or think I do) for a moment and then it’s lost again (rather like the offside rule, or long division).  But that last phrase – ‘one ventures from home on the thread of a tune’ – stays with me, and moves me somehow.  That thread – Ariadne’s thread – sounds so fragile.  And whereas it led Daedalus and Theseus out of the labyrinth and to safety, this leads from home to who knows where.   The music is the magic, the song is the charm.

Another phrase that’s lodged firmly in my mind since a fascinating seminar on Proust and Barthes by Thomas Baldwin from the University of Kent, is ‘variations without a theme’.  If there’s no theme, then what is it that’s being varied?  I think it’s Deleuze’s thread of a tune.   Whatever we begin with changes as we venture further from home – music as a form of becoming –  and we never go back to it, but what we hear is still connected, it carries the memory.  Beethoven’s Diabelli Variations give us a foretaste of what twentieth century composers would do with that freedom from the constraints of a theme – as Alfred Brendel wrote, ‘The theme has ceased to reign over its unruly offspring.  Rather, the variations decide what the theme may have to offer them.  Instead of being confirmed, adorned and glorified, it is improved, parodied, ridiculed,disclaimed, transfigured, mourned, stamped out and finally uplifted’ (Brendel, p. 114). 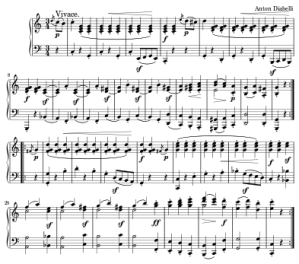 Music in the last century has truly ventured from home, and often denies the listener a reassuring homecoming, a resolution.  Beethoven can confound the listener’s expectations along the way, can sound a century later than he was, but finally, we know that all the threads will be gathered together, in a very firm and decisive final chord (albeit one for which we are made to wait, thinking each could be the final one, only to hear another, and another – as unforgettably parodied by Dudley Moore).   Even in jazz, we often know whilst we hear each of the soloists take the theme and play with it, however far out they go, that they will return at the end to the theme as we first heard it.

Music that doesn’t do that is hard.  The ‘difficult’ composers of the serialist movement and the postwar era have not become mainstream – the process whereby what appears new and scary gradually becomes accessible worked for Stravinsky and Debussy but not (yet?) for Boulez and Stockhausen.  We struggle to find the thread, to hold on to it, to follow it through the piece, and we feel unsettled when we end up not back at home but somewhere else entirely.

Deleuze and Guattari were drawn to Messiaen’s music because it puts ‘in continuous variation all components’ and forms a rhizome instead of a tree (Bogue, p. 24). As in a raga, the music could in theory go on forever,  and so we hear it as part of something bigger, not complete in itself.   (Sometimes an unresolved ending is very clearly an ending, nonetheless – I’m thinking of a chamber piece by Kurtag, beautifully performed by the incomparable Ensemble 360,  which ends abruptly, cut off in mid-phrase, as was the life that it commemorates, and I wish I could recall its title.).

Butor’s long-term musical collaborator Henri Pousseur shared his vision of polyphony and openness, saying that ‘composition will not always be the production of closed and finished objects which one can buy and sell …. We will have to think increasingly in a collective way ‘ (Obituary), and in his work expanded serialist techniques to integrate past musics, to mediate between styles which might seem irreconcilable.   As Butor said of poetry, ‘one can play infinitely, multiplying the variations and the processes of construction’, and he preferred to speak of art as transformation rather than creation, because the artist starts not with a blank slate, at the beginning of the process, but with all that there is already in the world, all of the words, the notes, the colours.  The threads are there to be woven together, to be followed wherever they lead.

All music is a dynamic, complex conversation; it’s ‘the domain of possibilities, or potentialities … a fold, a flow, a source of possibility, and in consequence a labyrinth‘ (Bidima, in Buchanan & Swiboda, p. 179).  The composer engages with the conductor and the performers, and they in turn engage with the audience in an encounter which will be repeated in other places and other contexts but will never be absolutely the same.  Some have taken this several steps further, giving opportunities for participants (performers or audience) to change the music by making choices, or introducing elements of pure chance (albeit within predefined parameters).  In Pousseur’s Miroir de Votre Faust (libretto by Butor), the soprano has to listen for her cue when a particular phrase recurs, and it recurs arbitrarily, because the pages, unbound so that the music can be shuffled around before performance, contain many ‘windows’ – rectangular holes that allow one to see through to the next one or two pages. The performer cannot be sure what is coming next or what will return in an entirely new context. In performance (and this can only work in performance) this creates enormous tension as she gathers herself up to sing and then pauses, realising this is not her cue, or launches herself, seizes the moment, just in time.  The sense of risk is exhilarating.

In the post-war world the notion of going home became at the same time more poignantly desirable and more problematic.  In Europe between 11 and 20 million people were displaced.  Many never found their way home.  Others did, but found that home, and they, had changed beyond recognition or recovery.  Even those who were not displaced by war – Butor and Sebald amongst them – had to question notions of home.  Butor, growing up in occupied Paris, saw a familiar childhood home become a place of darkness, suspicion, fear and danger, and his subsequent restless travels suggest that transformation had a long-term effect.  For Sebald a growing understanding of the Nazi era forced him to see his childhood home as a place of darkness and he found it impossible to settle in Germany; he said once that his ideal station ‘would be a hotel in Switzerland’, just as Butor chooses to live near the French/Swiss border.  So to be unsettled is to be of our times.   To venture from home, like Butor and Sebald, like Revel and Ferber, is to accept risk, but to set off new harmonics, to find in a city of emigrants the thread that connects with the unrecoverable home: ‘The valleys of Bleston do not echo/And with them is no more returning’ – Bleston IV, p. 21).

This entry was posted on April 3, 2012, 10:38 pm and is filed under Michel Butor, Music, W G Sebald. You can follow any responses to this entry through RSS 2.0. You can leave a response, or trackback from your own site.